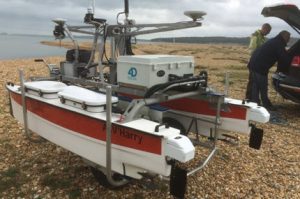 Assisting @dmallace of 4D Ocean with an ASV survey at Hurst Point to combine with the UAV survey data acquired two weeks previously. As part of a Channel Coastal Observatory project, the results will be used to monitor erosion of the shingle spit.