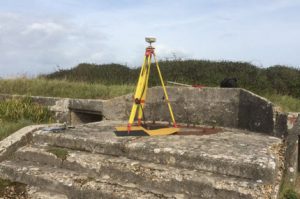 Installation of geodetic ground control points at Hurst Point prior to a UAV survey by 4D Ocean for a Channel Coastal Observatory project.

Hurst Spit is a hook-shaped shingle spit, extending 1.4 miles from the Hampshire shore into the Solent towards the Isle of Wight. The spit forms a barrier which shelters an area of saltmarsh and mud flats known as Keyhaven and Pennington marshes. At the end of the spit is Hurst Castle, originally built on the orders of King Henry VIII, and Hurst Point Lighthouse. The spit formed from loose flint pebbles which had been eroded from the cliffs further west. Although originally formed by natural processes, it has been declining in volume, probably since the 1940s when coast protection works in Christchurch Bay first began to interrupt the flow of the shingle towards the spit. Replenishment works have had to be conducted from time to time, most notably in the aftermath of the 2013-14 UK winter storms when New Forest District Council had to rebuild and reinforce parts of the spit.

4D Ocean’s eBee UAV is a fully autonomous drone, which is used to capture high-resolution aerial photos that can be transformed into accurate orthomosaics and 3D models.