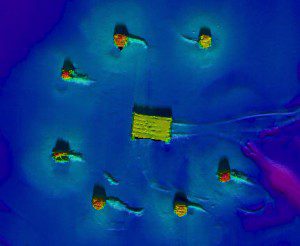 Seafloor Mapping Ltd were incorporated in December 2002, by Mark Crookes and Stephanie Ellis. We are primarily a sub-contracted company, specialising in the data acquisition, processing and presentation of hydrographic surveys performed using vessel, ASV, ROV and AUV-mounted multibeam echosounder systems.

Stephanie joined Seateam (UK) Ltd in 1992, following her graduation from Portsmouth University. After working on a variety of hydrographic survey projects for Seateam, she too joined Oceanscan, before also going freelance in 1995.

Whilst some projects are undertaken on a freelance basis, much of Seafloor Mapping’s work has been as a sub-contractor with companies such as NetSurvey Ltd, MMT AB, and latterly XOCEAN.