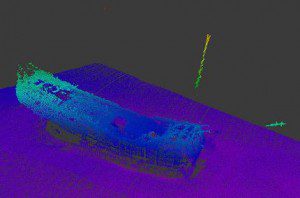 Sub-contracted through NetSurvey to provide Marin Mätteknik AB with specialist multibeam personnel onboard the MV Icebeam for the ‘Ghost Ship’ Expedition. First discovered by MMT in 2003, the ‘Ghost Ship’ is a virtually intact 17th century Dutch fluit (a long distance trading ship). Lying upright on the bottom of the Baltic Sea, at a depth of 130m, the wreck is exceptionally well preserved. In 2008 an international group was formed with the aim of conducting further research and analysis of the wreck. This expedition is considered to be the most advanced deep water maritime archaeological project ever conducted, using the latest survey techniques. One of the main objectives of the project is to create a detailed 3D model of the wreck, using an ROV mounted Reson 7125 SV multibeam system. The QINSy software suite is being used for initial data acquisition and processing, with Fledermaus used for cleaning and visualization. National Geographic have commissioned Deep Sea Productions to film the project, which will be broadcast internationally in 2011.