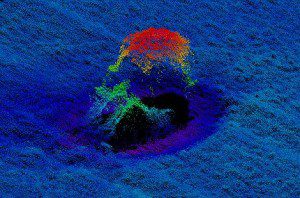 Sub-contracted through NetSurvey to provide Marin Mätteknik AB with specialist multibeam personnel onboard the MV Edda Freya for the Nord Stream Munitions Clearance project. Nord Stream is a 1220km offshore natural gas pipeline, which will be laid across the Baltic Sea, from Russia to Germany. During and after the First and Second World Wars, chemical and conventional munitions were deployed and disposed of in the Baltic Sea. Findings indicate that between 100,000 and 150,000 mines were deployed in the sea, primarily in the Gulf of Finland. Although the pipeline route was carefully selected, approximately 70 conventional munitions have been identified within the security and anchor corridors of the pipeline route. Clearance operations in Finnish and Swedish waters is being handled by BACTEC, with MMT supplying Vessel and ROV services. Very high-resolution bathymetry surveys are being conducted of the target sites using an ROV mounted Reson 7125 SV, both before and after the mine demolitions. This is the first Reson 7125 SV to be mounted on an ROV, with the system’s ability to compress all 512 beams into a reduced coverage sector providing significant advantages for the project. The QINSy software suite is being used for initial data acquisition and processing, with Fledermaus used for cleaning, surface generation, and visualization.